T2 isn't nearly as good as the groundbreaking 1996 classic (I mean, how could it be?) But it's not shite either. Fans of the original Trainspotting are likely to enjoy this one. It's a melancholic film that balances the comedy and serious moments quite well. I laughed out loud a couple of times. The cast is great, reprising their roles as the characters from the first film: Mark, Spud, Sick Boy and Begbie, who is still a complete psychopath. Robert Carlyle steals the show as Begbie. No spoilers, but my favourite scene is set in the dirty men's toilets in a nightclub. Being set 20 years later, the film is stylistically more modern than the dirty, gritty look of the original. It has some inventive visuals. The soundtrack is good, although I don't like The Prodigy's remix of Lust For Life as much as the original Iggy Pop version. I enjoyed T2. It's not just a rehash of the first film and I'd definitely recommend it to Trainspotting fans. Grade: B 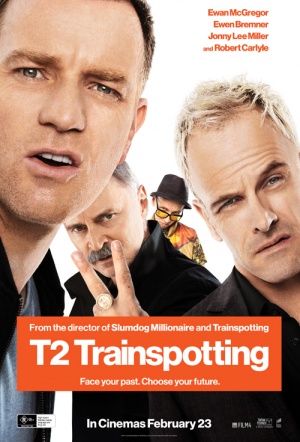