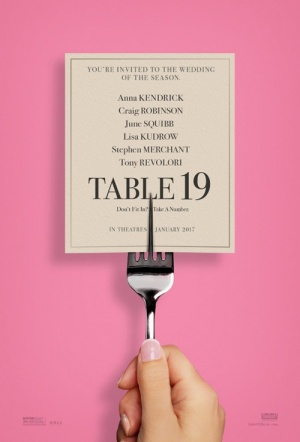 Anna Kendrick is an ex-maid of honour (having been relieved of her duties after being dumped by the best man) who insists on still attending the wedding in this comedy written by the Duplass brothers (Baghead, Cyrus). There, she is forced to sit with five randoms at the dreaded Table 19.

Everything you would expect happens, but little of it is funny or affecting.

The strangers-at-a-table concept turns out to be a thin excuse to cobble together what might have been the pilot episode for a glibly forgettable TV series.

The gags ought to have been put out of their misery and there's a deeply uncool unfeminist message.

Slapstick and sap vie for prominence in "Table 19," a comedy so lazy that it actually features someone falling off a log.

Divorce yourself from this unfunny wedding comedy.

Kendrick, one of the smartest actresses around, is playing well beneath her abilities. The movie is choking on fumes before it's even had the chance to begin.

Anna Kendrick has a recent track record of being decisively better than the movies she's in. Table 19, an innocuous but misguided mess written and directed by Jeffrey Blitz from a story by Mark and Jay Duplass, continues the trend.