3 years later, Ted the living teddy bear returns for another adventure involving a cavalcade of jokes that humans find themselves debating before they say them.

Mark Wahlberg returns as hapless John Bennett, the human who wished to life his teddy bear, Ted (voiced by Seth MacFarlane). The two thunder buddies find themselves dealing with polarised relationship troubles as John is now a divorcee from his ex-wife Lori Collins (previously played by Mila Kunis), while Ted has married his girlfriend Tami-Lyn (Jessica Barth), who find themselves fighting constantly.
After coming up with a "quick-fix" for their marriage, Ted is suddenly thrown in to a world where his status is questioned and he is bought before the courts to fight for his rights. Joined by Sam L. Jackson (Amanda Seyfried), the new trio bumble their way through the case on an adventure that's familiar but turned up to 11.

What MacFarlane was going to do with Ted 2 was any one's guess. After storming the Box-Office with his directorial debut, he could no doubt play around with what the sequel would do, and it shows. With a story that does all it needs to do to move the film through three acts, the jokes have been taken all the way over the line and the movie cares not for hurt feelings.

Following suit from his TV show Family Guy, MacFarlane has jokes lined up in every sentence, set-ups that pay off a long time after their introduction and featuring cameos left, right and centre, that Ted 2 can come down to a very simple statement: 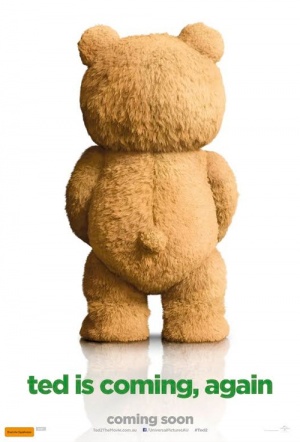