'Ted' begins with a pastiche of those Christmas magic Hollywood movie cliches as Patrick Stewart's rich toned narrator states: "Nothing is stronger than a young boy's wish... except an Apache helicopter." If that kind of humour don't rock your canoe, then you might not find the sight of Mila Kunis picking up a prostitute's turd from her carpet funny either... So, move on. That said, if, like me, you're a 'Family Guy' fan, 'Ted' is a treat.

See, I went to see 'Ted' hoping to get a live-action feature-length version of 'Family Guy' - and that's exactly what I got. Seth MacFarlane's big-screen debut contains all the 'Family Guy' traits - silly Broadway show-style tunes; over the top "did they just say that... out loud?!!!" near-the-knuckle racy racist, sexist, homophobic humour that's oh so un-politically correct in a post post (post post) modern ironic kinda way... or is it? Who knows....

There's a host of 'Family Guy' regulars too, from MacFarlane voicing Ted the teddy bear to the gravel-voiced Patrick Warburton, and Mila Kunis as Mark Wahlberg's long-suffering teddy bear burdened girlfriend. 'Community' star Joel McHale pops up as Kunis' smarmy boss and there are a host of A, B and C-list celebrity cameos (um, Sam Jones, the star of 1980 movie 'Flash Gordon'?!) to keep the geek in every fan happy for a week.

The pothead, self-referential humour and pop-culture references come thick n' fast - ('Ted' claiming he doesn't sound like Peter Griffin; 'Cheers' star Ted Danson reminiscing about Woody Harrelson's tiny dick; Wahlberg claiming his 'Star Wars' ringtone is from 'The Notebook' to appease his girlfriend) - and, whilst the scattershot humour may not appeal to all, if you've got a penchant for the surreal, silly, potty-mouthed and un-PC then 'Ted' will have you giggling like Stewie Griffin watching his mother Lois being attacked by a rabid dog named Brian.

There is a plot, but it's little more than an excuse to hang gags from. But then that's no different from 'The Hangover,' 'Due Date,' 'Bridesmaids' or pretty much any Hollywood comedy, right? Basically, 'Ted' is a potty-mouthed bromantic stoner comedy between a guy and his walking, talking, pot-smoking, swearing and bad-taste joking teddy bear... 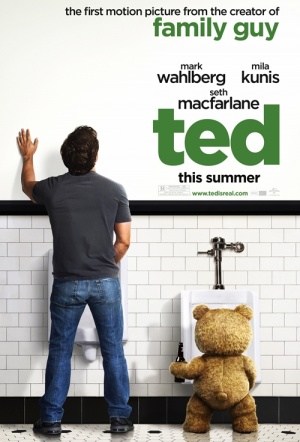