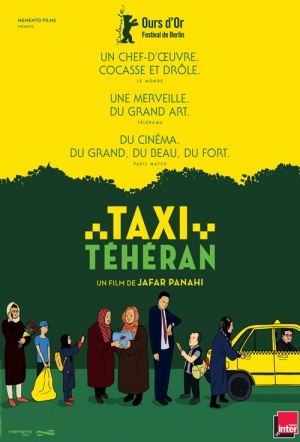 Drama shot in documentary a style with award-winning Iranian director Jafar Panahi (This Is Not a Film) taking the wheel of a taxi and interacting with non-actor passengers. Defying a state ban on filmmaking, Panahi developed this ingenious idea to film outside the previous settings of prior films - his apartment and a private house. Winner of the Golden Bear at the Berlin International Film Festival 2015.

"A yellow cab is driving through the vibrant and colourful streets of Tehran. Very diverse passengers enter the taxi, each candidly expressing their views while being interviewed by the driver who is no one else but the director Jafar Panahi himself. His camera placed on the dashboard of his mobile film studio captures the spirit of Iranian society through this comedic and dramatic drive." (Berlin International Film Festival)

The film is lightly entertaining, making its points about oppression in Iran gently.