That's Not My Dog! 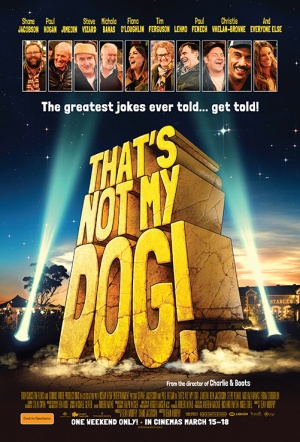 Shane Jacobson (playing himself) has his funniest celebrity mates over for a night of joke-telling in this Aussie party comedy.

The invite that goes out is clear: Don't bring meat. We'll provide the beer. Just come armed with nothing but the funniest jokes you've ever heard. It'll be a night of great friends telling their funniest jokes over a beer and BBQ. Among the invited are over 30 of Australia's biggest screen stars, as well as Aussie music icons like Ross Wilson and The Black Sorrows.

That's Not My Dog! / Reviews

This premise is pretty bloody 'strayan, and pretty bloody lazy; literally a matter of getting people to tell jokes and filming them.

I'd say that you had to be there, except that the guest-of-honour looks bemused rather than amused as he picks up his blanket and heads home for an early night.

Most gags are very old, rundown and have seen better days.