This film could be a story from The Outer Limits. The sci fi premise posits free will versus predetermined fate in the form of a love story between aspiring Senator David Norris (Matt Damon) and his instant attraction Elise Sellas (Emily Blunt). The Bureau is like a celestine corporation of agents who ensure their charges don't stray from their predestined paths. Despite the Bureau's best efforts to separate David from Elise, chance keeps throwing them back together. Their union deviates from the Plan devised by the Bureau Chairman. I liked how each agent (Harry, Richardson and Thompson) handled David differently. The chase scenes were tense fun and I thought of alternative endings. Phillip Dick of Total Recall, Blade Runner and Minority Report fame wrote this story. Ajustment Bureau is more romance driven and mystical than pure sci fi but still highly interesting and entertaining. 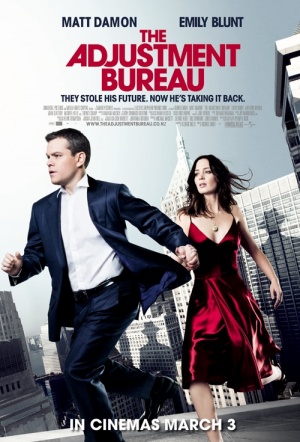