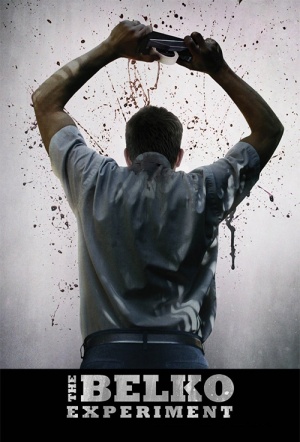 "It at first seems to be an ordinary morning on the job for a group of Americans working for a not-for-profit in a modern office building in Colombia. After noticing that their Colombian colleagues have not arrived for work, office worker Mike (Gallagher Jr.) spots some unfamiliar security guards entering a large hangar nearby. Moments later, an icy voice comes over the building's PA system and calmly explains that the employees must kill a certain number of their co-workers — if not, they will be killed themselves. While the boss (Tony Goldwyn) tries to calm the troops, Mike belatedly realizes that something truly sinister is going on — and when metal doors come sliding down on all the building's exits and windows, it becomes clear that friends and colleagues are now suddenly enemies in a bloody and brutal battle to the death." (Toronto International Film Festival)

As a self-aware guilty pleasure, "The Belko Experiment" may not quite seize greatness, but it does give it a playful squeeze.

A white-collar horror that's fun while it lasts, Belko is tense and inventively gory, but lacks substance and characters to root for.

By the end of the film, you're left with the unshakable feeling that everyone involved, from actors to filmmakers to the audience, is, and should have been, better than material like this.

…an inventively gory, frequently funny thrill ride that’s just the thing to kick back with at the end of a long week in the rat race.

A brutal, bloody battle royale that glides along nicely until a disappointing dip in the second half. Still, there are plenty of positive results from this experiment, especially for gore fans.

I didn't have fun watching The Belko Experiment and it didn't make me think about anything-either other than how much more of the film I had to endure before it was over.