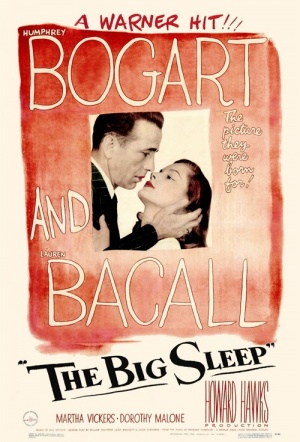 Humphrey Bogart is private detective Philip Marlowe in this 1946 noir classic based on the hard-boiled novel by Raymond Chandler. Co-starring Lauren Bacall and directed by Howard Hawks.

"Follows private eye Marlowe (Bogart) as he finds his way through the jungle of gamblers, pornographers, killers and blackmailers who have attached themselves to the rich old general (Charles Waldron) and his two randy daughters (Bacall and Martha Vickers). Some bad guys get killed and others get arrested, and we don't much care - because the real result is that Bogart and Lauren Bacall end up in each other's arms. The Big Sleep is a lust story with a plot about a lot of other things." (Roger Ebert)

Brittle Chandler characters have been transferred to the screen with punch by Howard Hawks' production and direction, providing full load of rough, tense action most of the way.

It's likely to leave you confused and dissatisfied.

No screen couple, before or since, had as much chemistry as Bogart and Bacall.

It is typical of this most puzzling of films that no one agrees even on why it is so puzzling. Yet that has never affected The Big Sleep's enduring popularity, because the movie is about the process of a criminal investigation, not its results.

Bogart as Marlowe is compelling in this classic thriller that is complex but triumph of atmospheric cool.