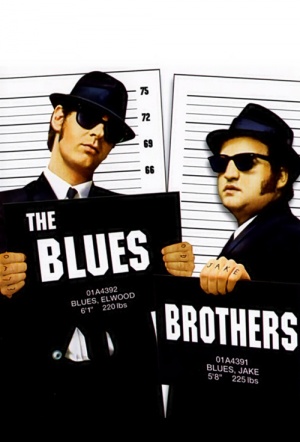 After the release of Jake Blues (John Belushi) from prison, he and brother Elwood (Dan Aykroyd) go to visit the orphanage where they were raised by nuns. They learn that the church stopped its support and will sell the place unless the tax on the property is paid within 11 days. The brothers attempt to raise the money by putting their band back together and staging a gig.

They may be on a mission from God but they're making enemies everywhere they go. Featuring performances by some of blues finest including James Brown, Cab Calloway, Ray Charles, Aretha Franklin.

Retains a huge nostalgic kick, thanks in large part to Aykroyd and Belushi's easy rapport, a smattering of daft, shaggy humour and some truly iconic musical sequences.

This long, expensive 1980 cult movie has an energy and individuality lacking in similar films nowadays.

There's even room, in the midst of the carnage and mayhem, for a surprising amount of grace, humor, and whimsy.

Still sounds great, and looks as good as ever through Ray-Bans.