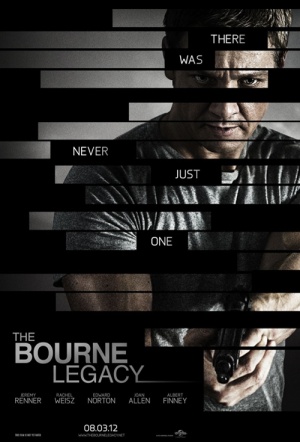 Jeremy Renner (The Avengers) stars as a new CIA super-agent set in author Robert Ludlum’s Bourne universe, placed in a life-or-death situation triggered by the events of the first three films.

Retracing the time-frame when Jason Bourne closes in on his identity in New York, a division of the US Secret Service simultaneously decides to tidy up loose ends. But experimental operative Aaron Cross (Renner) isn't willing to be discarded.

Also stars Rachel Weisz and Edward Norton. This is an original story, expanding on Ludlum's novels, written and directed by Oscar-nominee Tony Gilroy (Michael Clayton), screenwriter of all three prior Bourne films.

An overlong sequel that features too little action and an unnecessarily complicated plot.

Assured if not inspired, Legacy keeps the Bourne engine ticking over without reaching top gear. The action's accomplished and Renner's fine. Without Matt Damon, however, it feels like a placeholder.

Renner and scientist Rachel Weisz are sympathetic enough (although lacking in Matt Damon's all-American approachability), and the movie flies along briskly.

With The Bourne Legacy, Gilroy has brought characteristic taste and skill to a nearly impossible task: embracing the past without completely erasing it, thereby creating an invitingly complicated and open-ended future.

By the time Rachel Weisz, as a scientist called Dr. Marta Shearing, showed up in a lab coat, I stopped trying to parse every plot twist and just went with the action flow.

Jeremy Renner out-toughs Matt Damon in the fourth Bourne installment. But is the franchise already outmoded?

Gilroy stages two riveting shootouts involving Marta at work and home. And there's a killer chase scene in Manila as the bad guys try to knock Aaron and Marta off their speeding motorcycle. It's all sound and fury signifying nothing except a desperate need to feed a franchise.

The Bourne Legacy is always gripping in the moment. The problem is in getting the moments to add up.

The visceral excitement is muffled by familiarity, an insufficiently conceived lead character and the sheer weight of backstory and multiple layers of deception.

As earnestly as they have tried to continue the formerly excellent spy series, everything Gilroy and crew concoct only serves to mock the excellence and passion with which Greengrass delivered his films.

Gilroy does the unforgivable by turning out a lean thriller at a fatty 135 minutes, mainly by making the conspiracy plot far more complicated than it needs to be.