The Bridges of Madison County 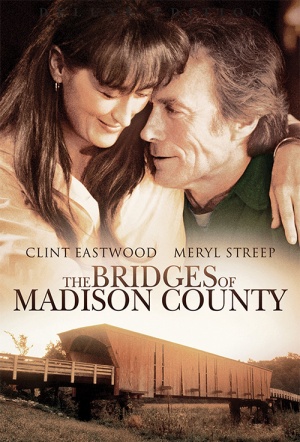 Robert Kincaid (Eastwood), a globetrotting National Geographic photographer, journeys to Madison County in 1965 to shoot its lovely covered bridges. Upon his arrival, he stops by an old farmhouse to ask directions, whereupon he encounters housewife Francesca Johnson (Streep) whose spouse and two children are out of town. Thus begins their four-day affair, a liaison that fundamentally changes them both. Later Francesca chronicles the affair in a diary which her flabbergasted grown children come to read after her passing, gaining them a greater understanding of their mother and of themselves.

The Bridges of Madison County / Reviews

Given the intelligent restraint of the treatment, this is about as fine an adaptation of this material as one could hope for...

Immaculately performed, and assembled with wit and sensitivity, this is one of the most satisfying weepies in years.

Madison County is Eastwood's gift to women: to Francesca, to all the girls he's loved before -- and to Streep, who alchemizes literary mawkishness into intelligent movie passion.

Limited by the vapidity of this material while he trims its excesses with the requisite machete, Mr. Eastwood locates a moving, elegiac love story at the heart of Mr. Waller's self-congratulatory overkill.

I've seen the movie twice now and was even more involved the second time, because I was able to pay more attention to the nuances of voice and gesture.

Screenwriter LaGravenese ought to get the Croix de Guerre for doing battle with Waller's fatuous prose and paring Bridges down to its most appealing fantasy romance essence.