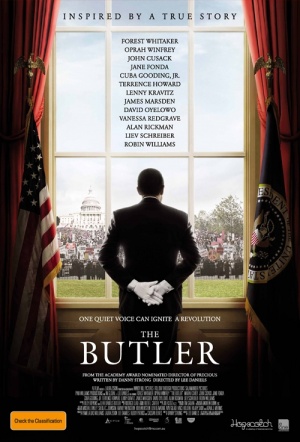 Based on the life of Eugene Allen, the story follows him from youth working on cotton farms to the top rank of butlers at the White House. During his tenure, Gaines witnesses the dramatic changes that swept American society from the civil rights movement to Vietnam.

When first interviewed for the butler’s job, Cecil Gaines is informed: “We have no tolerance for politics at the White House.” Yes, it’s easy for cynics to sneer, but with every main character afforded some complexity, what could have been Civil Rights 101 from the daytime TV-movie school is nowhere near as black and white.

Whitaker digs in deep and gives a marvelous under-the-skin performance; he seems to catch the very essence of a man who has spent his whole life trying not to be seen.

A brilliantly truthful film on a subject that is usually shrouded in wishful thinking, mythmongering and outright denial.

A great film about the American civil rights movement is way overdue. The Butler, overwhelmed by flash and good intentions, doesn't even come close.

In its bid to sum up the black experience in America, loses sight of the man at the film's core.

A self-conscious, would-be historical drama that's too distracted by star cameos and domestic strife to be truly effective.

Even with all contrivances and obvious point-making and familiar historical signposting, [it's] always engaging, often entertaining and certainly never dull.

Manipulative and preachy, The Butler is redeemed by a sensitive performance from Forest Whitaker and the undeniable power of the events it depicts.