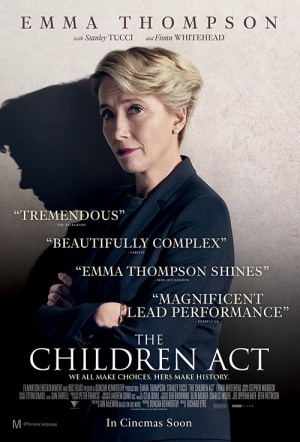 Emma Thompson, Stanley Tucci and Fionn Whitehead star in this morally complex legal drama based on Ian McEwan’s acclaimed novel about a judge forced to determine a child’s fate.

"Judge Fiona Maye (Thompson) is married to her work, which has become a problem for her husband, Jack (Tucci), who announces that he wants to have an affair. Treating the matter more as an annoyance than a life-altering crisis, Fiona kicks Jack out and focuses on her current case. The question: should a couple who are Jehovah's Witnesses be permitted to deny a life-saving blood transfusion to their leukemia-stricken 17-year-old son (Whitehead)? Fiona finds herself taking unusual measures to determine her verdict — measures that will have far-reaching consequences." (Toronto International Film Festival)

No one gives better pensive gaze here than Thompson; the drama lies in the fallibility of even the most competent and well-intentioned among us.

... "The Children Act" is that rarest of things: an adult drama, written and interpreted with a sensitivity to mature human concerns...

A beautifully internalised performance from Ms. Thompson and the various efforts to highlight the cinematic potential in Fiona's anguish... can't override the tidy ironies of Mr. McEwan's design.

Emma Thompson's performance, so elegant and vulnerable, carries the picture.

This is a riposte for anyone who thinks that all the great contemporary British drama can only be found on television.

The Children Act is a cerebral piece, for sure, and a disturbing one by the end, but Thompson's performance brings life to the complex moral questions it attempts to examine.

This film adaptation never reaches the intimate heights of Ian McEwan's novel, but Emma Thompson's portrait of a family court judge who lets the world in at the cost of losing her own judgment is acting of the highest order.

It's always rewarding to watch Thompson bring her lucid wit and deep emotional reserves to bear on a meaty role.

Another reminder, if one were needed, of the subtlety and skill of Emma Thompson's stratospheric talent.