The Chills: The Triumph and Tragedy of Martin Phillipps 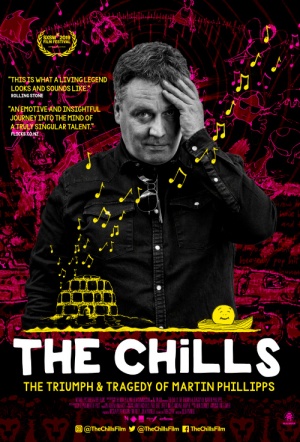 "Martin Phillipps came tantalisingly close to conquering the international musical world with his band The Chills, but instead fell into decades of debt and addiction in his hometown of Dunedin, New Zealand. At 54, he’s been given a dire medical prognosis, forcing him to face his demons and realise his musical ambitions before it’s too late. This intimate portrait follows the eccentric Martin as he reconciles a lifetime’s worth of curious collections, looks back on a catalogue of heavenly pop hits and relives his place in the iconic Flying Nun and Dunedin sound. With a startling sense of humour even in the blackest moments, we bare witness to one man’s universal battle with the fear of failure and the jarring reality of his own mortality." (SXSW Film Festival)

Director:
Julia Parnell ('Wilbur: The King in the Ring')Rob Curry ('The Boat People', 'The Ballad of Shirley Collins')

The Chills: The Triumph and Tragedy of Martin Phillipps / Reviews

Aotearoa music icons The Chills racked up plenty of fodder for a gripping music documentary as the band ascended to the world stage: great at writing songs and winning over fans around the globe, not so good at maintaining healthy band dynamics, comically terrible at retaining band members, and eventually seeming to get chewed up by the international corporate label apparatus.

[Martin] Phillipps' story, his long journey back to physical and spiritual health, his acceptance of his legacy and the promise of his newfound future makes for an engrossing and watchable film.

This is a story of a musical genius, honest and insightful and beautifully told, and rounded off with stunning images of the local landscape.