The City of Your Final Destination 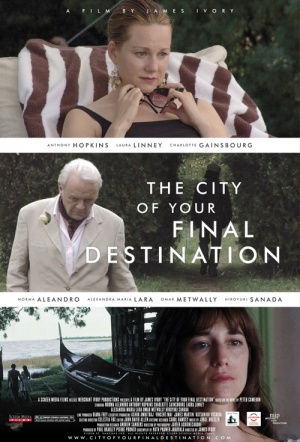 This is a Merchant/Ivory romantic drama (the first without producer Ismail Merchant, who passed away in 2005), marking director James Ivory's 23rd collaboration with screenwriter Ruth Prawer Jhabvala.

Omar Metwally stars as Omar, a graduate student in the US who wants to write a biography on the late Jules Gund – an enigmatic writer who spent his final years with his family in Uruguay before committing suicide.

His attempts to get Gund's family (including Anthony Hopkins, Laura Linney and Charlotte Gainsbourg) to comply, however, prove difficult so he travels to Uruguay to help change their minds...

The City of Your Final Destination / Reviews

Languid, multi-accented adaptation of the contempo novel by Peter Cameron suffers from an unfocused screenplay and direction.

Besides Ms. Linney's excellent performance and Mr. Hopkins's good one, the best things about the movie are its sensuous cinematography by Javier Aguirresarobe ("Talk to Her," "Vicky Cristina Barcelona") and a gorgeous soundtrack.

Its appeal naturally will be to book-reading audiences who appreciate films with well-written dialogue, a tony cast, lush visuals and the triumph of civilized values.