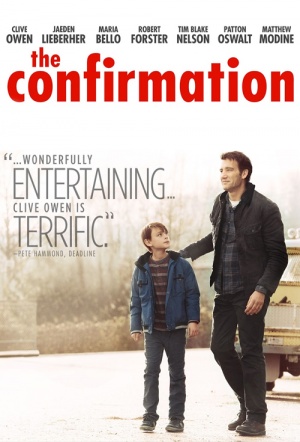 Anthony (Jaeden Lieberher, Midnight Special) gets to spend the weekend with his alcoholic, down-on-his-luck dad (Clive Owen), when his mum and step-dad (Maria Bello and Matthew Modine) head off to a religious retreat in this comedy-drama. First time feature from the writer of Nebraska, Bob Nelson.

Already awkward on both sides, the weekend becomes a series of unfortunate events with Walt (Owen) having to deal with his truck breaking down, his landlord locking him out of the house and the theft of his toolbox which he needs for an upcoming job. As father and son set out to find the missing tools they encounter a series of odd characters and even odder circumstances; the combination of which results in a major bonding experience for the pair.

It's amusing and endearing but rather flat dramatically.

A little gem of a film from the writer of the acclaimed film Nebraska (2013), this is a charming two hander in which a single dad and his young son bond during the weekend from hell

The pleasures are modest but rewarding in Bob Nelson's character study "The Confirmation."

A film that's pleasant enough to watch, but certainly won't live long in the memory.

This is a smart, effective coming-of-age tale about a boy figuring out that there are gray areas to life's moral choices.

Feature films these days rarely come as gentle and equitable as "The Confirmation."

A winning look at fathering during a rough patch.

...the Confirmation becomes a string of father-son misadventures that lack memorable characters or engaging dialogue.