The Conjuring works with the tried and true and delivers pure, unnerving terror and dread.

Horror, as a genre, just doesn't cut it in modern cinema. Audiences have become too desensitized to cheap images and loud noises to provoke a 'scare' that everyone has begun to believe that this is the norm. It has been the destruction of a great genre for the past 20 years and we've only had a shimmer of light maybe once a year, if we're lucky, on what truly can be done amongst the vast possibilities of horror. The Conjuring just shook the genre right back into place.

Based on true events, however dramatized, of one of the most shocking events witnessed by controversial paranormal investigators Ed and Lorraine Warren, The Conjuring lays out the era of the 70's in stylish fashion right from the opening frame and it brings you head first into the atmosphere of the film right away. From there only director James Wan can guide the way...and dare I say it, he has set himself as an auteur of modern horror. He knows not to tamper with a tried and true formula of old-school horror and just goes for the heights of pure, unflinching dread and unbearable tension in nearly every scene, setting up his frames beautifully and timing it all so well, teasing the audience and building the tension as slow as he dares to go within his rich and frightening atmosphere. He delivers a shock or two with sound, but its all set out to test the audiences limits before he truly unleashes a flurry of evil and terror that hasn't been done in such a film for years. I found myself more than once feeling completely unnerved. That is a tough thing to do with me. It was also a nice thing to see that even though the script isn't deep with character development, that the time is still taken to intertwine the family within the evil and show that the power of family is a godly thing.

Great performances across the board are held higher thanks to a truly terrific performance from Vera Farmiga. She has had a fair share of dips in the last couple of years but 2013 is looking to be the year for her.

The Conjuring has to be seen in theaters. Letting the sight of a large screen and the encompassing atmosphere really take you in will have you experiencing all the familiar horror beats, but delivered with such methodical skill and pure terror. This right here is the best horror film in many years and stands nicely as a wonderful reminder of what the classics were all about. 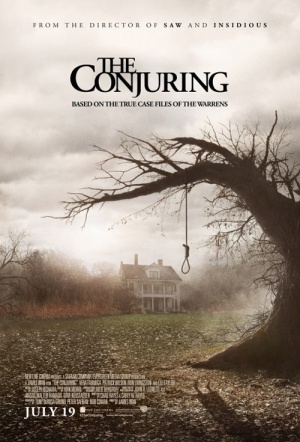