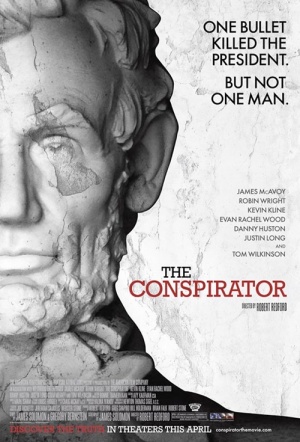 Historical drama from director Robert Redford about the trial of an alleged conspirator in the assassination of President Abraham Lincoln.

Mary Surratt (Robin Wright) is the lone female charged as a co-conspirator when the group who assassinated President Abraham Lincoln are put on trial. As the whole nation turns against her, she is forced to rely on her reluctant lawyer Frederick Aiken (James McAvoy), a 28-year-old Union war-hero, to uncover the truth and save her life. Also stars Rachel Evan Wood, Kevin Kline and Tom Wilkinson.

This methodical courtroom drama is charged with impassioned performances and an unimpeachable liberal message. But its stodgy emphasis on telling over showing will limit its reach to Civil War buffs and self-selecting older viewers.

Robert Redford’s first film since Lions For Lambs is a dull courtroom drama about the trial of eight people charged with conspiring to kill Lincoln.

The few glimpses we catch of the Ford's Theater production of "Our American Cousin" are unfortunately the liveliest and most convincing moments in this well-meaning, misbegotten movie.

Redford considers this material in an unusually literate and thoughtful historical film, working from years of research by his screenwriter, James Solomon. I found it absorbing and relevant today.