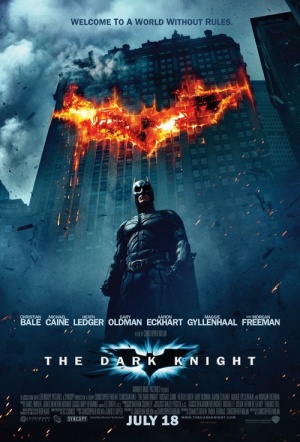 The second instalment in the rebooted Batman franchise, this time featuring Heath Ledger as The Joker in his Oscar winning performance. Batman (Christian Bale) sets out to destroy organised crime in Gotham for good, with the help of Lieutenant Jim Gordon (Gary Oldman) and District Attorney Harvey Dent (Aaron Eckhart).

The triumvirate proves to be effective, but they soon find themselves prey to a rising criminal mastermind known as the Joker - a psychotic criminal who thrusts Gotham into anarchy and forces the Dark Knight ever closer to crossing the fine line between hero and vigilante.

Morgan Freeman and Michael Caine return, and Maggie Gylenhaal replaces Katie Holmes in the love-interest role of Rachel Dawes. Directed again by Christopher Nolan (whose most recent film was the underrated The Prestige).

Remove yourself from the seat you're sitting in, find your way to a cinema, hand over your cash, buy a ticket. The Dark Knight delivers a hefty uppercut of superior pop entertainment. Christopher Nolan's rich and engrossing adventure rip-roars across the cinema screen, bullying blockbusters into new territory.

Enthralling...An ambitious, full-bodied crime epic of gratifying scope and moral complexity, this is seriously brainy pop entertainment that satisfies every expectation raised by its hit predecessor and then some.

A dazzling, determined superhero classic and Ledger puts Nicholson in the shade. With Batman Begins Nolan set the bar; with TDK he's just raised it.

Pitched at the divide between art and industry, poetry and entertainment, The Dark Knight goes darker and deeper than any Hollywood movie of its comic-book kind.

Iron Man and even more so The Dark Knight move the genre into deeper waters. They realize, as some comic-book readers instinctively do, that these stories touch on deep fears, traumas, fantasies and hopes.

In an already legendary performance, the late Ledger is gloriously unhinged, giving you nothing to grasp on to character-wise, and all the more disturbing for it.

To see it is to understand that Nolan and his co-writer brother Jonathan saw a chance to go deeper into familiar characters and mythology, a chance to meditate on darker-than-usual themes that have implications for the way we live now.

Bale again brilliantly personifies all the deep traumas and misgivings of Batman's alter ego, Bruce Wayne. A bit of Hamlet is in this Batman.

Ledger's performance is monumental, but The Dark Knight lives up to it. Nolan cements his position as Hollywood's premier purveyor of blockbuster smarts – and the Batbike is kinda cool, too.