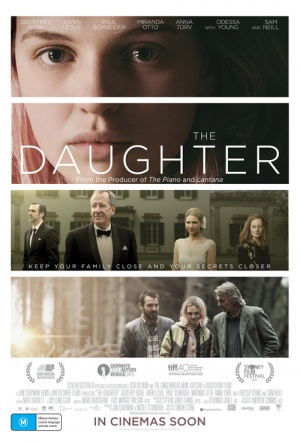 Geoffrey Rush, Sam Neill, Ewen Leslie, Odessa Young, Miranda Otto and Paul Schneider lead this family-feuding drama from Australian theatre wunderkind Simon Stone (who made his screen debut as part of 2013 anthology drama The Turning). This is an adaptation of Stone's 2011 stageplay, itself an adaptation of Ibsen's The Wild Duck.

"Christian (Schneider) returns to his family home, after a long absence, for his father Henry's lavish wedding to a much younger woman. Henry (Rush) is the owner of the local timber mill, which he is closing down, causing much hardship in the area. While home, Christian reconnects with his childhood friend Oliver (Leslie), an employee at the timber mill who is now out of a job. He begins to bond with Oliver's wife Charlotte (Otto), daughter Hedvig (Young) and father Walter (Neill) and starts piecing together a puzzle that will have devastating consequences." (Sydney Film Festival)

I was engrossed by the elements and the superb look of the film, yet I felt a little disappointed that it never yields the emotional power that it should.

The writer-director returns to The Wild Duck for his lush, moody feature debut, reconfiguring Ibsen with sublime production values and a pedigree cast.

The entire cast responds to the director's subtle and intelligent vision, giving performances that resonate long after the film is over.

It's a noble effort but Stone's direction is far from pitch perfect and Ibsen and the laconic tones of Australian country life don't really make a match.

The weighty effort, which premiered at the Sydney Film Festival, succeeds in conveying intimacy and conjuring tension courtesy of strong performances, and will appeal to audiences fond of textured emotional dramas, even though its narrative wallows in familiar territory.

It left me sobbing. And that's a rare and precious thing.

Delicately unsettling and decidedly affecting in equal measure, this well-acted Australian drama is sure to divide audiences in coming weeks.