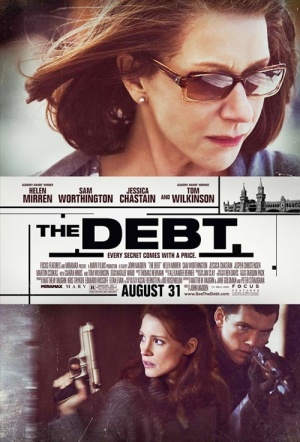 Spy thriller following the story of Rachel Singer (played by the great Helen Mirren), a former Mossad agent who endeavoured to capture and bring to trial a notorious Nazi war criminal – the Surgeon of Birkenau – in a secret Israeli mission that ended with his death on the streets of East Berlin.

30 years later, a man claiming to be the doctor has surfaced, and Rachel must go back to Eastern Europe to uncover the truth. The still-celebrated heroine must relive the trauma of those events and confront "the debt" she has incurred.

Also stars Sam Worthington (Avatar), Tom Wilkinson (In the Bedroom) and Kiwi Marton Csokas (Romulus, My Father). The Debt is based on the 2007 Israeli film Ha-Hov.

There's nothing here that feels particularly original beyond the structure itself, which skillfully keeps one guessing until late in the game.

The Debt pays off as an intelligent thriller that's more concerned with human emotions than political intrigue.

IT grips like the proverbial vice, skilfully negotiating a succession of twists, turns and reversals against an expertly recreated Cold War setting.

The Debt holds you in its grip.

This stuff plays to the strength of cinema, underlining the details of each strategy and the dangers it involves.

Director John Madden (Shakespeare in Love) doesn't stage the events like something out of a seamless action thriller — he creates suspense with the rough edge of reality.

This offers something for those looking for a film with more on its mind than simple set-pieces.