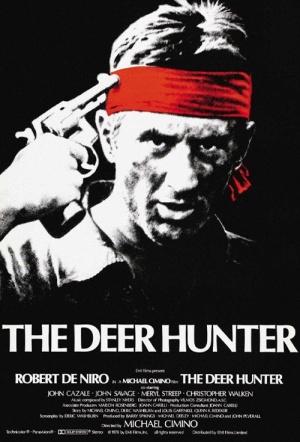 Three young working-class men are taken from their humble steel mill jobs to the army recruitment centre, taking their deer-hunting skills to the battlefields of Vietnam. Before their deployment, Michael (De Niro) and Nick (Walken) attend Steven’s (Savage) shotgun wedding – which also doubles as the men’s leaving party. But the horrors they experience as airborne infantry will shake the trio, significantly altering their lives forever.

In order to heighten tension during the Russian roulette sequence, Robert De Niro insisted on putting a single bullet in the gun. Because they were responsible, they made sure the live round wasn't in the chamber before the trigger was pulled. However, the slapping during that scene was not faked at all.

The film is ambitious and succeeds on a number of levels... proves that Cimino is an important director who deserves to be watched carefully.

Cimino's daring elegy to a war-torn community may be a long haul, but the extravagant running time is a small price to pay for such gut-wrenching performances...

Its feelings for time, place and blue-collar people are genuine, and its vision is that of an original, major new film maker.

It is a heartbreakingly effective fictional machine that evokes the agony of the Vietnam time.

A simultaneuosly touching and harrowing experience that puts the audience directly in the shoes of one man's experience of Vietnam.