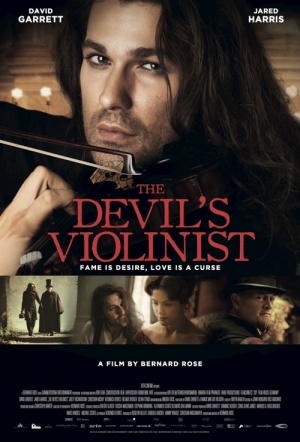 Biopic on Italian violinist and composer, Niccolo Paganini (played by violin star David Garrett), who rose to fame as a virtuoso in the early 19th century. The title derives from the myth surrounding Paganini, alleging that he played so well he must have sold his soul to the devil. From Bernard Rose, director of Immortal in which Gary Oldman played Beethoven.

Even if, like me, you're a sucker for men with tossable hair and precision eyeliner, you can't help noticing that "The Devil's Violinist" is hysterical - and possibly historical - hooey.

While his story follows the Amadeus arc along meticulously precise beats, it still lacks a sense of shape, or a sense of stakes, to go with its pounding melodrama.

Though his dramatic performance is somewhat too mild, classical-pop violinist David Garrett brings an electrifying musical authenticity to the lead role in "The Devil's Violinist."

Could have used some Ken Russell-style pizzazz.