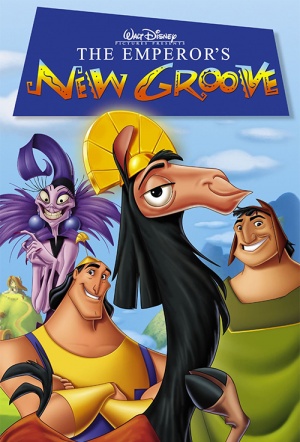 David Spade stars in the 40th Walt Disney Classics release, an animated buddy comedy about an arrogant young Emperor who must reclaim the throne after being ousted.

Emperor Kuzco (Spade) is transformed into a llama by his power-hungry advisor, the devious Yzma (Eartha Kitt). Stranded in the jungle, Kuzco's only chance to get back home and reclaim the high life rests with a good-hearted peasant named Pacha (John Goodman). Together, they must return Kuzco to the throne before Yzma tracks them down and finishes him off.

Bears outs the wisdom of the shift from the original, serious conception to this comedic one.

Sharp, streamlined nonsense that bristles with wit and energy, the Emperor's New Groove lifts Disney out of a very old rut.

A timely reminder that animated films don't have to be grandiose visual circuses with full Broadway scores to entertain.

A zany tonic, more upbeat and funnier than the lugubrious Dr. Seuss' How the Grinch Stole Christmas.

A delightful, effervescent morality tale for children conveyed with such wit and sophistication that adults are likely to be enchanted as well.