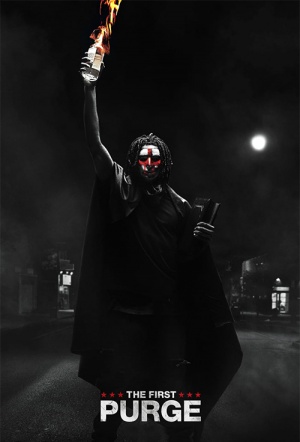 The prequel to 2013's Blumhouse sci-horror The Purge details the rise of the USA's 12 hours of annual lawlessness.

To push the crime rate below one percent for the rest of the year, the New Founding Fathers of America (NFFA) test a sociological theory that vents aggression for one night in one isolated community. But when the violence of oppressors meets the rage of the marginalised, the contagion explodes from the trial-city borders and spread across the nation.

The First Purge is a slipshod B-movie comic book rooted in gangbanger clichés. It’s a threadbare “Boyz N the Hood” meets “Lord of the Flies.”

A brilliantly achieved transition from a hard-edged, social-realist visual style in the film’s opening act to the overtly John Carpenter-esque gloss and throb of Purge Night itself.

The First Purge is firmly committed to the power of resistance, personified by a small band of locals who fight to protect their community.

Clumsy attempts at comedy are weaved in to try and alleviate the remarkable grimness but all it really does it add to an uneven tone.

Who needs a coherent text when you've got all this American carnage to watch?

By delivering the story within the framework of genre cinema at its most trashy and garish, the filmmakers convey any message as a bit of rough pleasure amid the kicks and thrills of a movie.

Still fails to establish a persuasive connection to our own moment in time — its occasional winks to current events serving as limp zingers instead of stinging commentary.

With a sharper focus on race and plenty of real-life horrors to draw from, Gerard McMurray brings a fresh perspective to this splashily satirical prequel.