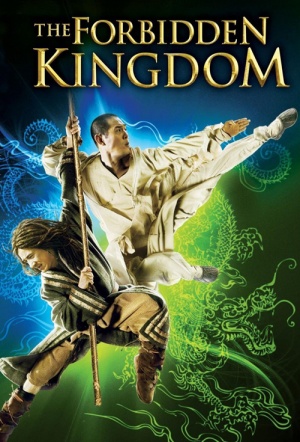 An American teenager who is obsessed with Hong Kong cinema and kung-fu classics makes an extraordinary discovery in a Chinatown pawnshop: the legendary stick weapon of the Chinese sage and warrior, the Monkey King. With the lost relic in hand, the teenager unexpectedly finds himself traveling back to ancient China to join a crew of warriors from martial arts lore on a dangerous quest to free the imprisoned Monkey King.

There, he meets the drunken kung-fu master, Lu Yan (Jackie Chan); an enigmatic and skillful Silent Monk (Jet Li); and a vengeance-bent kungfu beauty, Golden Sparrow (Crystal Liu Yi Fei), who lead him on his quest to return the staff to its rightful owner, the Monkey King - imprisoned in stone by the evil Jade Warlord (Collin Chou) for five hundred years.

Two of the martial arts genre's most celebrated sons, Jet Li and Jackie Chan, appear together for the first time in The Forbidden Kingdom. Li had previously stated that he was done with Kung Fu flicks, but the Weinstein brothers must have flashed their cheque books because he's back again. Chan, on the other hand, is starring in his first Hollywood feature where he’s not also responsible for choreographing the fisty cuffs. That responsibility instead falls to Woo-Ping Yuen, the man behind the fight scenes in The Matrix and Kill Bill. While this assemblage of talent will have kung fu enthusiasts licking their lips in anticipation, the end result will likely be a disappointment to them.

A faithful and disarmingly earnest attempt to honor some venerable and popular Chinese cinematic traditions.

The result is joyous and exhilarating.

Great fun family entertainment for those keen to become a kung fu warrior.

Visually the film is stunning. There are mythical Chinese magic elements which are nostalgically pleasing, especially with today's advanced special effects helping to make them look incredible.

A dance of combat and humor saves a contrivance from drowning. Or, rather, Chan and Li elevate it enough to make it into a good time.

The missing link between '00s wushu, '80s kids' fantasy and '70s chop-socky, this manages to be thoroughly entertaining - and the face-off between Chan and Li is worth the entrance price alone.

The film's mixed success continues elsewhere. While most of the costuming, set design, make-up and choreography are first rate, Chan sports an obvious and awful wig and David Buckley's overblown score often drowns out the admittedly stilted dialogue.