I am a big fan of Eli Roth. He brings a sense of 'brutal realism' to most of his movies and this is no exception. It delivered on the gore and effectively distinguished modern society from primitive society.

Largely influenced by the highly controversial Cannibal Holocaust (1980), this movie borrows lots of elements from that movie including the underlying theme of humanity in terms of primitive and more advanced societies. A group of environmental activists, who assist in preventing the destruction of native Amazonian forests, become prey of these native tribe. Roth successfully establishes the implications of one's positive actions on another group doesn't actually replicate the opposite way. It poses the question whether we share a common language of understanding and feelings with each other, regardless of our social, economic and cultural separations.

Despite the many clichés present in this film it proves to be a somewhat strong entry into the torture sub-genre of Horror with extremely gruesome scenes of murder, often depicted in a normative light from the perspective of the native tribe members. One particular scene stood out, which defined the events that will ensue. The death of the first activist felt like a sadistically awful scene as he suffered the amputation of his limbs and facial appendages. Scenes of such high levels of gore are usually omitted from most Horror movies in order to avoid getting an R rating, and therefore a restricted audience, however, I commend Roth's legacy to continue getting into the 'no guts, no glory' philosophy by showing the brutal reality of most things.

The primitive nature of the native tribe was perfectly depicted as their 'social norm' is well established with the abovementioned scene. What may be seen as horrid and gruesome to the modern society may be a seen as normative to the natives. Due to being closed of from the education of westernisation and morality the natives fail to realise their wrong-doing, rather relying on primitive behaviourisms of survival instincts and resourcefulness to sustain their lifestyle.

I also appreciate the filmmakers' decision to film this movie with a real, primitive Peruvian tribe. As such, the behaviorisms, reactions and mannerisms of the natives felt authentic and realistic. Of particular note, the filmmakers showed the natives Cannibal Holocaust, which they found funny. This just goes to show the differences in understandings of what morality and codes of conduct mean in a vastly primitive environment.

This movie will always live in the shadows of Cannibal Holocaust regardless of certain tweaks made to this movie. When the most controversial horror movie can be appreciated more than this movie it just goes to show the various levels within which this movie failed to create the response it was trying to do. For the most part, this movie failed to create a genuine sense of inevitability and impending doom. It is interspersed with comic relief, especially the 'munchies' scene. I feel like this movie should have focussed more on the authenticity of terror and being trapped by cannibals.

None of the actors proved to elicit an authentic response that would make us care about their ultimate fates. Although the acting and reactions to the situation seemed real, the dialogue suffered due to a poor script. There seemed to be tendency towards dark humour which seemed unrealistic if that were the situation. I can just imagine myself being more genuinely scared and kicking into 'survival mode' if I were trapped by cannibalistic tribe members.

Cannibal Holocaust succeeded in philosophically exploring the morality of who the actual 'primitive' being is, despite the controversial goal. Similarly, this movie also tried to do that, however, failed to make me introspect this theme as the execution lacked the creative drive and the narrative was poorly manoeuvred. The thing that worked great was how the activists realised that the tribe whom they saved were willing to eat them nevertheless, thereby implying the elements of primitivity. However, in the end, the somewhat brave act of the protagonist (Justine), to continue to help save the natives' forest despite their cannibalistic actions seemed ineffective.

The final scenes felt like an out-of-character moment which only undermined the ability of this movie to elicit realistic responses from audience members. I can easily see most audience members being confused by this final act of defiance. Although the underlying philosophy is there it is the general mood of the movie and the direction of the narrative that makes this misplaced and unnecessary. At the end of the movie, it is still established that the natives are primitive in nature, capable of killing human beings for food, however, Justine's act to protect them seems unnecessary especially when they killed her friends. You might expect her to still show resentment for their actions, however, she still accepts their primitivity as an explanation for that. Ultimately, this is not enough for me to be fully convinced that Roth succeeded in sending this important message of primal instincts and who is really immoral. 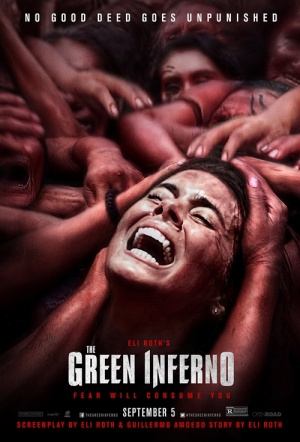