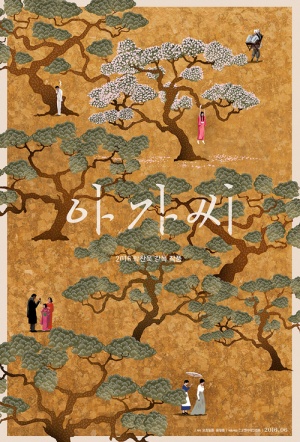 "1930s Korea, in the period of Japanese occupation, a new girl (Sookee) is hired as a handmaiden to a Japanese heiress (Hideko) who lives a secluded life on a large countryside estate with her domineering Uncle (Kouzuki). But the maid has a secret. She is a pickpocket recruited by a swindler posing as a Japanese Count to help him seduce the Lady to elope with him, rob her of her fortune, and lock her up in a madhouse. The plan seems to proceed according to plan until Sookee and Hideko discover some unexpected emotions." (Cannes Film Festival)

Mostly, this is smart, sumptuous and wonderfully indulgent.

Shifts from being a lascivious slice of art-house delirium to a gruelling, dislikable contraption which meretriciously sells out its source material.

The impotency of the male characters helps to counter this while the sex scenes themselves, as lovingly shot as they might be, feel vital to the narrative.

A haunting, beguiling and rousing drama that is not for the faint-hearted or prudish.