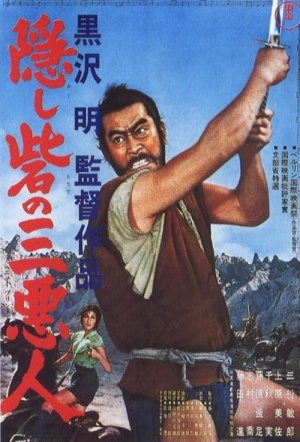 Classic Japanese adventure from legendary filmmaker Akira Kurosawa, made four years after the masterful Seven Samurai. The film was a huge influence on George Lucas and the creation of Star Wars.

Set in feudal Japan, the tale follows Tahei and Matashichi, two peasants who encounter a couple hiding out in a fortress with a massive supply of gold. In desperate need of help, the man and the woman ask the two greedy peasants for help to cross over to allied territory, promising a share of the gold for their assistance. But unknown to Tahei and Matashichi, their new companions are actually a famous General and a Princess.

Essentially a superficial film and that Kurosawa, for all his talent, is as prone to pot-boiling as anyone else.

Arthouse classics aren't usually as welcoming and entertaining as this.

Kurosawa stages every scene with an eye toward screen-filling spectacle, [...] But he's also concerned with the characters' journey, and how they change-or don't-along the way.

Somewhat overshadowed by the likes of Seven Samurai, this is a vigorously played and meticulously staged adventure. It's not quite top drawer, but it still ranks among the best of Kurosawa's minor masterpieces.