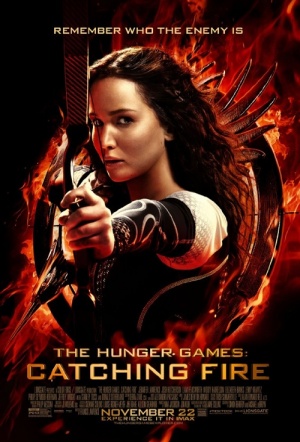 The second entry in the post-apocalyptic thriller franchise sees the return of Jennifer Lawrence’s Katniss and Josh Hutcherson’s Peeta. Still troubled by the violent events of the first film, the duo are sent on a tour of the districts to celebrate their achievement, but as open rebellion threatens to break out, the rulers of Panem throw them back into a fight for their lives. Directed by Francis Lawrence (I Am Legend).

After surviving the last Hunger Games, Katniss' actions have ingnited the hint of a revolution within the districts. But the iron fist with which they are ruled proves stronger than ever and Katniss is again forced into the role of propaganda tool and combatant, facing off in another deadly free-for-all tournament - this time going up against victors from previous years. Philip Seymour Hoffman and Jena Malone join the cast alongside returning co-stars Liam Hemsworth, Woody Harrelson, Elizabeth Banks and Donald Sutherland.

Revisiting the dystopian setting of last year’s The Hunger Games, Catching Fire makes even more of Jennifer Lawrence’s rising star than its precursor. Like her character Katniss, the actress continues to reveal hidden strengths both when this sequel demands more range in her performance and when she’s simply required to cover familiar ground.

Makes for rousing entertainment in its own right, leaving fans riled and ready to storm the castle.

Expands Suzanne Collins' novel beyond the confines of the arena to tackle some seriously brutal truths.

The keepers of Suzanne Collins's trilogy of fantasy novels have dodged the perils of the sloppy second franchise film.

Not quite a full course, more of an amuse bouche, making its mammoth audience hungry for future, meatier instalments.

It’s not just bigger, it’s better, and it bodes well for the future of the series, if not necessarily of its unlucky protagonist.

A safe, serviceable, carefully crafted action drama in which the subversive seeds planted in the first story take welcome root.

This second grittier, more confident round of Hunger Games thrills us into submission.