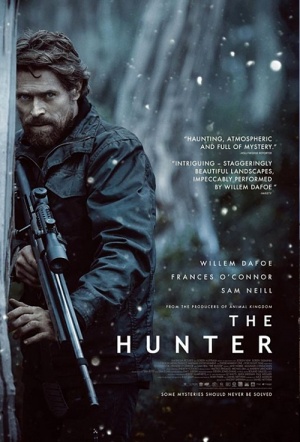 "Both a classic tale of man versus beast and a chilling explora­tion of the ethics involved when the goals of multinational corporations conflict with the natural world... an allegory charting one troubled man’s foray into dual wildernesses: the remote Tasmanian hills and his own soul." (Toronto International Film Festival 2011)

Beautifully lensed and impeccably performed byWillem Dafoe... maintains an intriguing ambience, but general audiencess may feel they're not given enough information about the protag to become fully immersed in his journey toward redemption.

A tremendous achievement by all concerned, a film that delivers its emotional payload with sensitivity and power.

The result is intriguing and Nettheim succeeds in giving The Hunter an unsettling ambience but, finally, it seems hollow at the centre.

It taps into questions of solitude and loneliness, obsession and repression of emotion, all tied up with an eco-conscious bow.

As ever, Dafoe is tremendous and the Tasmanian wilds provide a potent backdrop to an arty expedition.