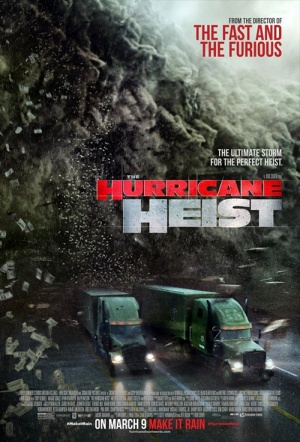 Under the threat of a hurricane, opportunistic criminals infiltrate a US Mint facility to steal $600 million for the ultimate heist. When the hurricane blows up into a lethal Category 5 storm and their plans go awry, they find themselves needing a vault code known only by one Treasury Agent (Maggie Grace), a need that turns murderous. But the Treasury agent has picked up an unlikely ally, a meteorologist (Toby Kebbell) terrified of hurricanes but determined to save his estranged brother kidnapped by the thieves.

It may be a strong early candidate for the worst movie of 2018, but don’t let that deter you – bad movies this fun don’t come along every day.

Unable to muster true engagement with the banal plot and characters, or deliver the kind of inspired ridiculousness that makes for a guilty pleasure.

Unforgivably more boring than bad, this has characters, dialogue and music of a quality that would come free with a make-your-own-action-movie kit, while the special effects are anything but.

All entirely but watchably absurd, and Kebbell himself carries it off with some style and shows he's got exactly the right leading-man chops.

Dialogue tends toward the eye-rolling variety and performances feel uneven across the board...