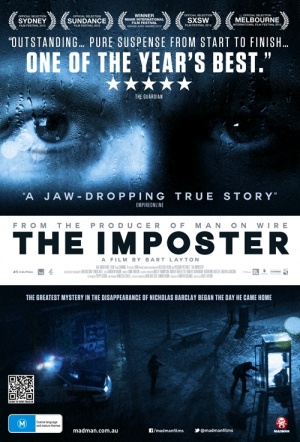 Documentary thriller unravelling the mysterious, legendary French con artist Frédéric Bourdin and his most famous coup: convincing authorities and a victim's family that he is a 16-year-old American boy who had gone missing three years earlier. Says Bourdin: "From as long as I can remember, I wanted to be someone else. Someone acceptable".

In 1994 a 13-year-old boy disappeared without a trace from San Antonio, Texas. Three and a half years later he is found alive, thousands of miles away in a village in Southern Spain with a story of kidnap and torture. His family is overjoyed to bring him home. But all is not quite as it seems. The boy bears many of the same distinguishing marks he always had, but why does he now have a strange accent? Why does he look so different? And why doesn't the family seem to notice these glaring inconsistencies? It's only when an investigator starts asking questions that this strange tale takes an even stranger turn…

Creepier than "Catfish" and as cinematic as "Man On Wire," this is an unnerving story immaculately told and a strong contender for documentary of the year.

Blessed with an improbable-but-true story that functions on many ironic levels, this clever documentary ultimately conveys more about the complex American character - shifting between intimacy and criminality - than a whole shelf of fiction films.

Slippery, manipulative, unstable and smoothly confounding. One of the most entertaining documentaries to appear since Exit Through the Gift Shop...

A movie that offers hard speculation and harder truths. You won't be able to get it out of your head.

This is a train wreck you think you see coming, but no matter how prepared you are the nature and extent of the damage will overwhelm you.

The mysteries stick with you. In 20 years time, someone will leap up and shout, "Eureka!"

That old idiom about truth being stranger than fiction is an understatement when applied to Bart Layton’s enthralling documentary.

The year's most fascinating and frightening doc so far, The Imposter delves far beneath the hysterical tabloid headlines.