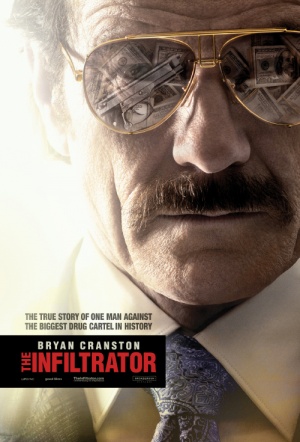 Navigating a vicious criminal network in which the slightest slip-up could cost him his life, Mazur risks it all building a case that leads to indictments of 85 drug lords and the corrupt bankers who cleaned their dirty money, along with the collapse of the Bank of Credit and Commerce International, one of the largest money-laundering banks in the world.

Bryan Cranston gets a film role worthy of his ability to break bad in a tensely exciting true-life drama of undercover drug agents.

Composer Chris Hajian breaks out the percolating Jan Hammer synthesizers, and the '80s decadence wafts offscreen like a stink.

Even when playing a nice upstanding guy, Mr. Cranston's approach is complicated.

Cranston changes his character from regular Joe to raging psycho - and you believe it utterly. He's extraordinary. Too bad the movie settles for being same old/same old.

Cranston... continues his rewarding post-"Breaking Bad'' big-screen career with another juicy real-life role in the highly entertaining "The Infiltrator."

It's Cranston's most accomplished and subtly layered film performance to date.

Cranston turns every moment of duplicity, which is to say nearly every scene of The Infiltrator, into an emotionally textured high-wire act.