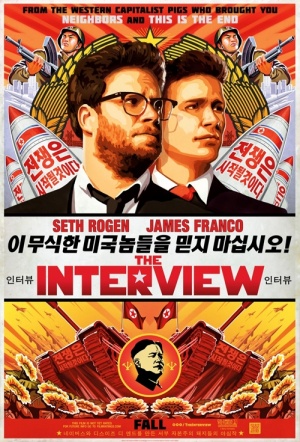 James Franco and Seth Rogen's onscreen partnership continues, here playing a talk show host and producer who land an interview with Korean dictator Kim Jong-un - but are asked to assassinate him instead. From the directors of This is the End.

Shortly before the film's US release in December 2014, a mass hacking of Sony emails and servers dumped sensitive internal material online. The hackers demanded that The Interview be pulled from release, threatening attacks on screenings and purporting to be doing so on behalf of North Korea. Cinema chains rushed to cancel screenings, and Sony initially cancelled the release of The Interview before a limited run in cinemas and on on demand platforms.

Despite the US Government directly blaming North Korea for the hacking and levelling sanctions against the diplomatically isolated nation, it remains unclear who was responsible. North Korea denies involvement, and some security experts theorise a disgruntled former employee, or employees, were behind it. Either way, these events are unparalled in the scope of material leaked and the impact on a multinational company's decision-making.

More tasteless farce than blistering satire, The Interview is a relatively innocuous comedy, the injustices of North Korea serving as a glaze over the usual bro-out antics between Seth Rogen and James Franco. It's a more ordinary film than This Is The End or Pineapple Express, and the main point of difference is an obsession on the part of the filmmakers with things going into and coming out of butts.

About as funny as a communist food shortage...

[Fashions] "The Great Dictator" and "Inglourious Basterds" into a cross joint and then [lights] it from both ends...

Its lesson is that American pop culture is inescapable, our great achievement and most popular export, the weapon we wield abroad and the glue trap we struggle with at home.

Both Rogen and Franco, who have marvellous chemistry and exude good cheer, continue to tweak their personas in this very amusing, very imbecilic film.

Even with a strong first half lampooning the vapidity of American news media, The Interview is the worst thing Rogen has ever done.

It's stupid. It's in bad taste. It impossible. I know all that. Look, Quentin Tarantino killed Hitler in "Inglourious Basterds" and the neo-Nazis stayed quiet. It's a farce, people.

An intensely sophomoric and rampantly uneven comic takedown of an easy but worrisomely unpredictable target.

Should ultimately stand as the boastfully juvenile lightning rod that modern American culture deserved — no butts about it.