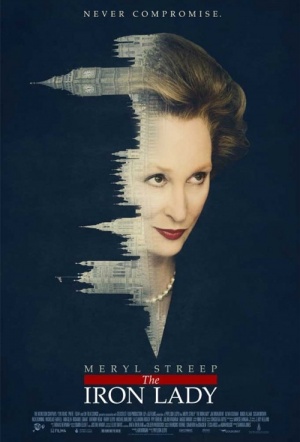 British Prime Minister (from 1979 - 1990) Margaret Thatcher biopic with the great Meryl Streep (in an Oscar, Golden Globe and BAFTA winning performance) playing the titular Iron Lady. Tells Thatcher's story via flashback, including the lead-up to Britain's controversial involvement in the Falklands War in 1982. Jim Broadbent plays her husband Dennis.

The Iron Lady blog says the story is about a "woman who smashed through the barriers of gender and class to be heard in a male-dominated world. The story concerns power and the price that is paid for power, and is an intimate portrait of an extraordinary and complex woman."

Fuzzy-headed biopic, which glosses over the former British prime minister's politics in favor of a glib, breakneck whirl around her career and marriage.

Not Iron Man’s mother, but an adroit if flashy tribute to Mrs Thatcher’s ascent to power. Sly satire and a sublime Streep should tempt in more than the party faithful.

This is a brave stab at a contemporary life, and even with its flaws it does Margaret Thatcher a certain grudging justice. Awards should be coming Streep’s way; yet her brilliance rather overshadows the film itself.

A breezy, whistle-stop tour through the unstable nitroglycerin of Thatcher's life and times.

Meryl Streep gives a fully realized portrait of British Prime Minister Thatcher in a biopic that values character over context.

One of Streep’s finest-ever performances. But beyond that — whatever Morgan and Lloyd’s intentions — it’s little more than a myth-enshrining exercise.