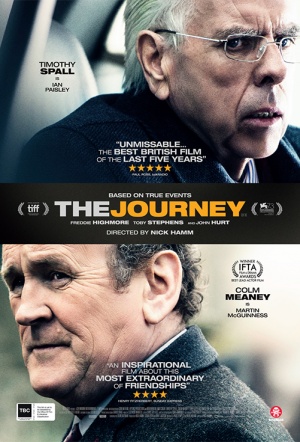 Timothy Spall and Colm Meaney star in this drama chronicling the events preceding the 2006 St. Andrews Agreement, which brought peace to Northern Ireland.

"Today's headlines can make it tough to believe in the possibility of peace between warring factions. Yet this is just what happened only 10 years ago, when the Democratic Unionist Party and Sinn Féin (the political party of the Irish Republican Army) signed the St. Andrews Agreement, bringing peace to Northern Ireland after nearly 40 years of violence. The Journey dramatises the negotiations that led to the Agreement — negotiations that transpired not in some hallowed hall but, rather, in a minivan traversing the Scottish countryside.

"Protestant minister and DUP leader Ian Paisley (Spall) and Sinn Féin MP Martin McGuinness (Meaney) are arch-enemies, each deeply involved in the Troubles, which have long plagued Northern Ireland. They've both agreed to participate in the British-organized talks in St. Andrews, Scotland, but many doubt their capacity to bury the hatchet. Paisley has to break from the talks to attend his golden wedding anniversary, and when rain forces him to fly out of Edinburgh instead of a nearby airport, McGuinness comes along for the ride. What neither knows is that their seemingly innocent driver (Freddie Highmore) is a British agent, the van is bugged, and a very nervous Tony Blair (Toby Stephens) is watching in desperate hope that these old antagonists can settle the matter during the afternoon detour." (Toronto International Film Festival)

The Journey is basically the feature-length version of the rabbi-priest-atheist weed-smoking video that was doing the viral rounds a few months ago. It shares with that clip a not-unwelcome idealistic notion that individuals with wildly clashing beliefs are able to find common ground through a bit of good ol’ civil discourse.

It's a movie that follows every trope in the book, and does so with pleasing fireworks and finesse.

The Journey is an apocryphal drama about the Northern Irish peace process, and makes its subject look like a methodical tootle around the block by comparison.

Though the script tilts to the didactic, the performances are absolutely delicious, with Mr. Meaney droll and understated and Mr. Spall fiery and derisive, yet not above a joke.

This film feels the need to be fair, to be balanced. That is understandable. But it is tiptoeing on eggshells of its own making.

Although it breaks no new ground, there's heart, humour, charm and even a little healthy mischief...

While Hamm and Bateman have the right idea overall, their love of contrivance too often gives "The Journey" the sense of being reverse-engineered ...

he Journey is an entertaining movie if more like fiction as fact than fact as fiction. Hamm insists there is a basis of truth in the story and it is relatively easy to believe him.