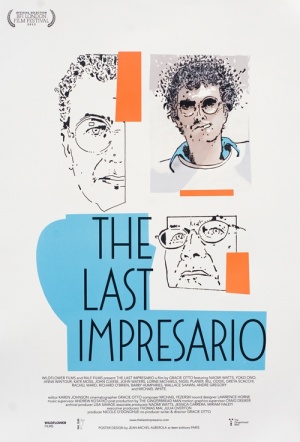 Documentary biopic on Michael White, the British playboy, bon vivant and producer whose output in the 1970s influenced a cultural transformation in London. Features a cast of admirers including Kate Moss, Yoko Ono, Anna Wintour, John Cleese and John Waters.

The London theatre and film impresario produced over 200 shows and movies over the last 50 years. White brought to the stage the risqué productions of Oh! Calcutta!, The Rocky Horror Show and to the screen Monty Python’s The Holy Grail, as well as introducing Merce Cunningham, Pina Bausch and Yoko Ono to London audiences. Fondly known as 'Chalky' by his friends, he is now in his late 70s and still enjoys partying like there’s no tomorrow.

A gloriously English answer to “The Kid Stays in the Picture”... . Triumphing over adversity, breaking all the rules, leading with his heart rather than his head, charismatic playboy Michael White puts an individual spin on familiar tropes.

What emerges is an affectionate, slightly melancholy evocation of a life - incomplete, but engaging.

For all the film's shortcomings, White's story does ultimately shine through.