The Legend of Barney Thomson 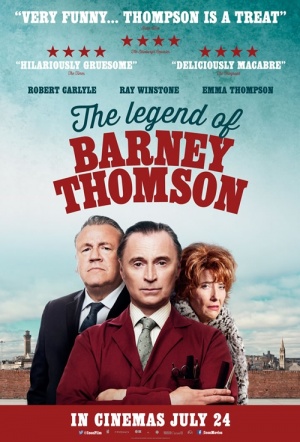 Black comedy about Barney (Robert Carlyle, who also directs) - a downtrodden barber who, after an accidental killing, turns to his fierce mother for help. Co-stars Ray Winstone and Emma Thompson.

"Based on a novel by Douglas Lindsay – the first of seven books about Barney Thomson... Emma Thompson is a revelation as the mother, complete with Glaswegian accent and a serious amount of make-up to help transform her into a truly memorable character. The strong cast also includes Ray Winstone (as a fish-out-of-water London copper exasperated by his Scottish police colleagues), Martin Compston (as one of Bobby’s hairdresser rivals) and veteran actor Tom Courtenay (as the police chief baffled by a serial killer who is mailing body parts from a series of different Scottish tourist spots)." (Edinburgh Film Festival)

The Legend of Barney Thomson / Reviews

Carlyle keeps on top of the story’s increasingly deranged twists and turns, even if the Tarantino-esque mix of gore and comedy clashes oddly with more studied moments of localism.