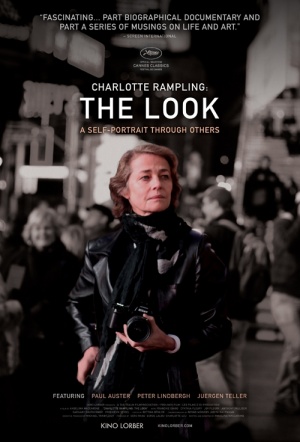 "What does the world look like through the eyes of Charlotte Rampling? She played the beautiful and worldly foil to Lynn Redgrave’s Georgy Girl in London’s swinging sixties, before Luchino Visconti brought her to Italy for The Damned. Her role in Liliana Cavani’s The Night Porter spawned an international debate. She inspired Helmut Newton to take his first nude photographs.

"In New York she was Woody Allen’s personification of the perfect woman. And as her film career continues well into its 5th decade, she endures as the classic ‘object of desire’. Breaker of taboos, feminist, icon avant-gardist… to capture this woman’s persona presents a challenge that succeeds remarkably, by being as unfettered and brave as the actress herself. In The Look, Rampling’s life story is uncovered via a series of fascinating conversations about life’s big questions between the subject herself and a collection of photographers, writers, poets, painters and filmmakers, including Peter Lindberg, Paul Auster and Jürgen Teller." (French Film Festival 2012)