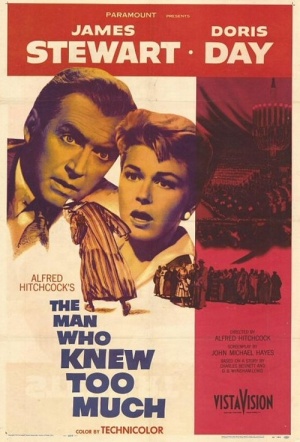 Alfred Hitchcock remakes his own 1934 mystery thriller about an ordinary man (Jimmy Stewart) who learns of an assassination attempt, but is forced into silence when his son is kidnapped. Co-stars Doris Day as Stewart's wife.

In the exhaustive and excellent Hitchcock/Truffaut interview book Hitchcock said of the his two versions: "Let's say the first version is the work of a talented amateur and the second was made by a professional."

Best Music, Original Song at the 1957 Academy Awards for the song 'Whatever Will Be, Will Be (Que Sera, Sera)'
1956Rating: PG114 minsUSA
MysteryThrillerClassic

While drawing the footage out a bit long, he still keeps suspense working at all times and gets strong performances from the two stars and other cast members.

Making marvellous use of settings and locations, Hitchcock treats the viewer to superbly choreographed set-pieces.

Starting slowly amid colourful but rather superfluous travelogue-style Moroccan footage, the film improves no end as it progresses.

Even in mammoth VistaVision, the old Hitchcock thriller-stuff has punch.

Hitch's remake of his own film results in an equally compelling action thriller with sterling performances from Stewart and Day.