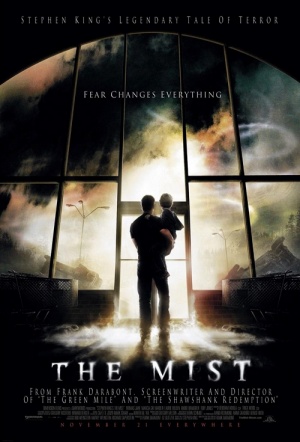 Frank Darabont, director of everyone's favourite film The Shawshank Redemption, adapts another Stephen King work. This time it's an apocalyptic horror story set in a small town in Maine, USA.

David Drayton (Thomas Jane) and his five-year-old son Billy are among a large group of terrified townspeople trapped in a local grocery store by a strange, otherworldly mist. David is the first to realise that there are things lurking in the mist… deadly, horrifying things that entered this world through an inter-dimensional rift. Survival depends on everybody in the store pulling together… but is that possible, given human nature? As reason crumbles in the face of fear and panic, David begins to wonder what terrifies him more: the monsters outside in the mist, or the ones inside the store, the human kind, the people who until now had been his friends and neighbours? In particular, he faces the wrath of the deeply religious Mrs. Carmody (Marcia Gay Harden) who belives that Armaggedon has arrived on earth.

Of his film, Darabont says "How primitive do people get? It's Lord of the Flies that happens to have some cool monsters in it."