The More You Ignore Me 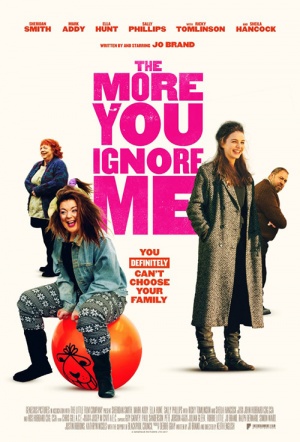 A young, rural England mother (Smith) struggling with mental illness develops an obsession with the local weatherman, which leads to an admission to a psychiatric hospital. Her daughter Alice (Ella Hunt, Anna and the Apocalypse) struggles to relate to her heavily medicated mum, and chaos ensues when she attempts to reconnect with her.

The More You Ignore Me / Reviews

If you're looking for a decent rom-com, then The More You Ignore Me ticks all the boxes. But, under the laughter, there is also a seriously good and well-informed unpacking of what mental illness can do to a family, both good and bad. Go see it.

Keith English's film of Jo Brand's novel has a typical Brit-flick kind of hokiness, and this limits the poignancy of the heroine's relationship with her mother.

An appealing, bittersweetly funny tale of a Morrissey-mad teenage girl whose life is regularly derailed by her mother's worsening mental state.

It is a bit rough around the edges at times, with some pretty broad dramatic effects, but the narrative motor keeps humming and the sheer force of sympathy drives it along.