Confused, muddled, poorly scripted and at times just plain boring, this clubfooted attempt at merging Universal’s monsters with the plot of THE AVENGERS is the most monstrously grotesque aspect of a movie that’s a horror for all the wrong reasons. Instead of S.H.I.E.L.D. we get Prodigium, a shady organisation to save us all from monsters, much like the BPRD in HELLBOY, only with a LEAGUE OF EXTRAORDINARY GENTLEMEN vibe. Running things is Russell Crowe, as Dr Hyde.

Nicking liberally from the comedic caper that was the Brendan Fraser MUMMY movie of the 1990s, but with a darker overall tone, this version casts Sofia Boutella as an Egyptian princess wrapped in bandages and bent on global domination.

Directed by Alex Kurtzman (writer of COWBOYS & ALIENS, STAR TREK: INTO DARKNESS and a couple of TRANSFORMERS movies), it’s no surprise that the focus is on big dumb action over character, plot or any semblance of sense. Kids and popcorn munching crowds may be entertained, but the lame attempts at laughs fall flat, the narrative makes little sense and the pace plods.

Cruise seems oddly miscast as the antihero, grappling between good and evil pulling on his soul, with a character that bounces from one scene of exposition to another action set piece with little more to do than appear alternately surprised or bemused as he’s bashed, smashed and tossed around by CGI spectacle.

It’s all a matter of personal taste of course, and whilst the likes of COWBOYS & ALIENS bored me to tears, many lapped it up. So, if you enjoy your spectacle, action and creaky comedy, this undemanding adventure may be right up your pyramid. Me? I’d far rather watch every classic, black and white, Universal Horror movie again than wade through this modern monster movie misfire. 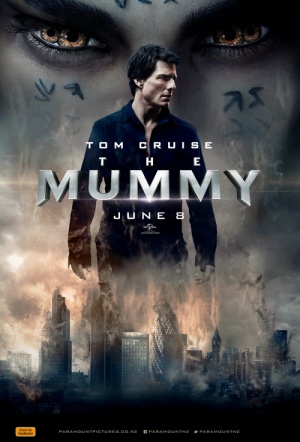