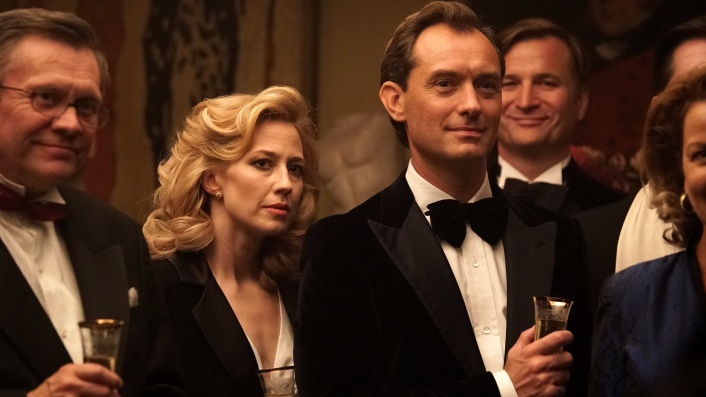 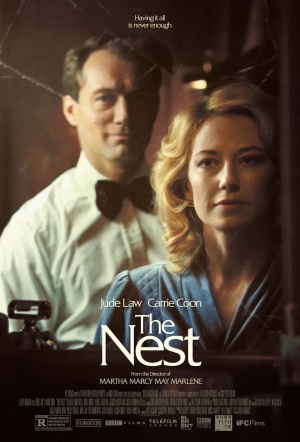 Two-time Oscar nominee Jude Law plays a well-off British entrepreneur who moves his American family to an archaic English manor house they can barely afford, causing tensions to rise between him and his wife (Emmy nominee Carrie Coon, Gone Girl). From the writer-director of Martha Marcy May Marlene.

Rory (Law), an ambitious entrepreneur and former commodities broker, persuades his American wife Allison (Coon) and their children to leave the comforts of suburban America and return to his native England during the 1980s. Sensing opportunity, Rory rejoins his former firm and leases a centuries-old country manor, with grounds for Allison’s horses and plans to build a stable. Soon the promise of a lucrative new beginning starts to unravel, and the couple have to face the unwelcome truths lying beneath the surface of their marriage.

At the end, you might be a bit confused by what has really happened, or is yet to. But the journey has been absorbing.

As a statement on a decade of consumerism, The Nest doesn’t have anything particularly new to say, but as a fable of familial dysfunction, it’s resonant and, yes, frightening, with nary a ghost in sight.

Law and Coon aren’t the only reason to see Durkin’s marital nightmare of a movie, but they are the main reason to see it, and both of them give these characters so much shared history communicated without saying a word.

Perhaps not surprisingly, the movie works better as a free-floating societal critique — of materialism, of so-called domestic tranquillity — than as an incisive commentary on any of the topics it brushes up against. But The Nest’s atmosphere of animosity is palpable enough that it’s wicked fun simply watching the O’Haras become unglued.

Durkin captures it all with a sort of menacing restraint, building a deeply disquieting mood from long, almost voyeuristic shots and loaded gazes.

The Nest is a complex movie, despite its economical size.

The Nest’s true star is that cavernous 15th-century mansion, which provides Durkin and Erdély with endless opportunities to carve out sinister voids that threaten to swallow this nuclear family whole.

Writer-director Sean Durkin ("Martha Marcy May Marlene") has delivered a nearly perfect film here — the cinematic equivalent of of those substantial, long-but-not-too-long short stories that says everything about its subject without actually saying everything.

If The Nest amounts to an elaborate exercise in style, at least it matches the material. Rory’s obsessions are all surface and no depth. For better or worse, the movie follows him into that void.

The Nest burrows into the minutiae, and the rewards of going along with the O’Haras are worth it, at least for those willing to risk the frustration of a movie that plays by its own rules and doesn’t necessarily believe in happy endings.

The Nest lingers long after the final credits. It may not have the same surprising newness that juiced the debut of Martha Marcy, but it casts an ineffable spell nevertheless.

It’s elegantly constructed and precisely composed, with Durkin painstakingly recreating an era without falling into nostalgic overload. But it’s also a drama about a family that keeps us at a distance for the most part.