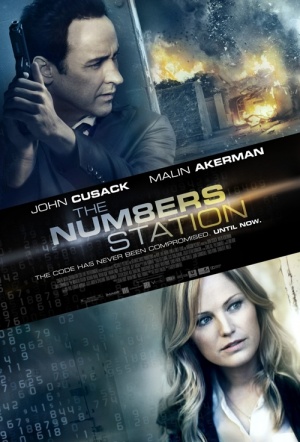 John Cusack leads this CIA thriller as a black ops agent, dropped down the ranks after failing a psychological exam. Awarded the seemingly simple task of protecting a code announcer (Malin Akerman, Watchmen) at a remote numbers station, they are soon confronted by a deadly ambush that turns a mundane assignment to a fight for survival.

First appearing after World War II, numbers stations transmit audio streams of digits read by emotionless, sometimes artificial, voices. Broadcast in several languages, and even Morse code, numbers stations are thought to be used for the purposes of espionage, so that government agencies can communicate with spies in the field.

This dreary spy drama is as flat and airless as the concrete bunker in which it unfolds.

A serviceable CIA spy thriller whose solid international cast, led by John Cusack, doesn’t quite make up for the film’s lack of scope and flair.