I was pleasantly surprised to hear that Shane Black, star of the original Predator movie, was directing this movie. As such, I was expecting elements from the original that made it an action-packed and gore-filled success, and these were definitely evident in this movie.

The amount of gore was jaw-dropping, bringing us back to a time where CGI wasn't present and more creative methods were used to create the realism of horror. At the same time, the action involved in this movie elevates it somewhat to a bearable level, where it can be compared to the originals and the recent addition.

There is also some investment into the deeper philosophical meaning of 'predator' or 'predators'; which becomes a blurred line between man and the extraterrestrial creature. The obvious iteration is the predator itself, which hunts for sport, food and warrior status. Then there is the men involved in this movie, who are ex-convicts, who can be labelled as the 'predators', at times depicting the voracious predator-like qualities. Ultimately, it is the genetically-modified predator that overpowers the meaning to a grand status, as a species which hunts certain individuals of strengthening qualities so it may inherit theses advantages to become the ultimate 'apex predator'.

Additionally, I commend Black for staying true to the series by having no CGI-ed predator. As a result, all the action felt real, as if the predator is a living and breathing entity, with similar qualities to human beings.

Despite a somewhat distinctive narrative and action, borrowed vaguely from the original, this movie fails to operate on many cylinders. The obvious criticism is one where the originals set the bar so high, its very difficult to consider movies on their level.

Firstly, the mainly man-led cast failed to exude uniqueness, machismo and the complexities of their personalities to be appreciated effectively. The cast from the original all stood out in their own unique way which enabled the audience to better appreciate the team chemistry between them and their complex human natures. However, this movie felt like a bunch of semi-par punch lines and inappropriate jokes, while appreciable in a more comedic scene, seem to drown out the suspense and action. As such, the comedic legend, Keegan-Michael Key, seemed like a wasted talent deliberately casted in this film to provide comedic humour.

Boyd Holbrook failed to provide any machismo to the level that Arnold did as Dutch. Even his complicated relationship with his estranged wife and son seems to be played out vaguely. You cant help but not care for this emotional storyline, which doesn't carry the movie forward nor give the effect it was trying to get.

The antagonistic force, led by Traeger, also felt like a failed execution or unnecessary at all. It felt an extra dimension of complexity being added to this storyline making you think what is this movie trying to focus on; the predator or the humans. This, along with the vague family reunion, the forgettable characters and a laughable demi-predator ultimately led to this movie's demise.

I was begging that this movie would at least make up for the poor script, unnecessary casting, vague storyline and complicated layers of interactions with a jaw-dropping final scene to continue the saga, but once again, it only got worse. It tried to imply the continuation of the saga, however, I think it shouldn't 'stick around' anymore. and only focus on the AVP franchise more. 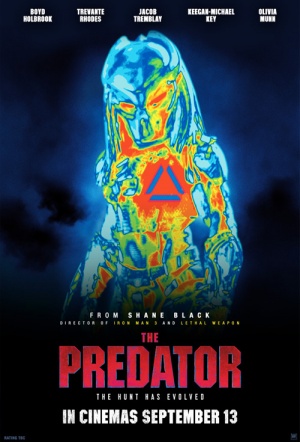