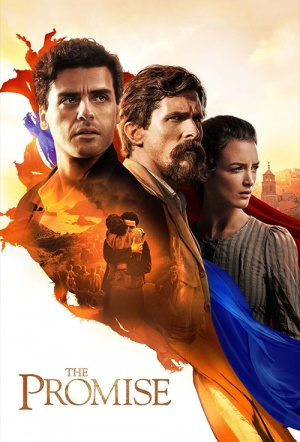 When Michael (Isaac), a brilliant medical student, meets Ana (Le Bon), their shared Armenian heritage sparks an attraction that explodes into a romantic rivalry between Michael and Ana’s boyfriend Chris (Bale), a famous American photojournalist dedicated to exposing political truth. As the Ottoman Empire crumbles into war-torn chaos, their conflicting passions must be deferred while they join forces to get their people to safety and survive themselves.

This fictional love story is an epic bore.

There's something to enjoy about its traditional brand of storytelling, devoid of any irony.

It's a handsome film and George manages to keep the genocide in focus with shots of the Turks herding long lines of refugees across the desert expanses. But the full horror is kept at one remove.

The Promise finds Oscar Isaac lending his soulful, heartthrob magnetism to material that fails to achieve the timeless, old-fashioned feel to which it aspires.

It's a brutal war film, but it returns over and over to its ultimately unsatisfying romantic plot.

This will not enjoy the critical support given to George's Hotel Rwanda; compared to that flawed but affecting picture, this one looks like it was stamped by a cookie cutter.

Ultimately, The Promise is more admirable than enjoyable, but perhaps that was the intent.

There's nothing wrong with old fashioned if done the right way, but 'The Promise' feels like the kind of film that's out of date.