The first movie helped set the mood of the series. The second movie amped up the action and craziness out in the streets. This final installment sought to widen the political implications of the Purge. This is why this movie stands out uniquely and deservedly enmeshes in the series as a whole.

While the first 2 movies focussed more on the violence and interpersonal relationships, this movie strays away from these social and physical attributes of the movie and tries to implicate politics as a driver of the very fabrics within which this experiment was authorised. Sanctioned by the Founding Fathers, a political affiliation consisting of powerful American politicians, security forces, governing bodies and affiliated parties, just goes to provide the deeply institutionalised and entrenched nature of this policy. This very political fabric is further explored through the brave opposition of Senator Charlie towards the Purge. This drives the narrative from the start to finish as the Founding Fathers realise that she is gaining a lot of traction from the public to demolish this agenda.

What follows is a decently violent and action-packed film with further political layers, which dwell on the primal necessity of survival in order to offset a powerful opposition. This is exactly what Senator Charlie undergoes as she becomes the prime assassination threat of corrupt security, Purge supporters and participants. Progressively, she gains further perspective of the practicalities and horrors of the Purge and the implications of her death to the resistance agenda.

This movie effectively reminds us of the superficiality and deeper workings of the political system with all the different parties involved. On the surface, they seek to undermine the opposing parties' views while a deeper insight shows the murderous nature implied in such systems of thought. As such, this movie is an introspective one, where we are left thinking whether there is unbiasedness in a usually biased political system, which is usually driven by greed of money, similar interests and superficial notions of power. While these philosophies may not be overtly obvious in this movie, it is more the implied perspective, such as the more tonal shift towards the political drive that drives the pacing and narrative of this movie. It ultimately becomes a movie about the devout trust of strangers on saving Senator Charlie's life so that she can survive long enough to destabilise this powerful opposition and desecrate this inhumane practise.

This movie therefore implicitly represents a depiction of the parliament, with political parties undergoing coalition to gain power and traction against opposing forces. This notion is continually explored. Despite the dangers of the outdoors, seemingly dangerous strangers become allies of the protagonists through 'the enemy of my enemy is my friend' perspective.

Apart from the political effectiveness of this installment, the violence is equally unique and disturbing at the same time with a varied representation of oppositionists apart from the obviously dangerous Founding Fathers. From the French tourists partaking in this controversial practise to disturbingly deviant teenage girls, this movie entertains the audience with a balanced act, which doesn't just make the audience introspect political implications but also talk about entertaining scenes.

Nevertheless, this movie's downfall is ultimately depicted by its lack of character development, which sadly slows down the narrative and makes me not feel anything for most of the characters. The second film perfectly explored the desire for vengeance on the part of Barnes and how it ultimately transformed from unhindered revenge to acceptance over his wife's death. This very humanistic emotion and further interpersonal growth was lacking from him in this third act. The same could be said with some of the other returning characters, most of whom rather depicted a 'hard-natured' behaviourism and absence of their vulnerabilities.

This movie's heavy investment into politics also undermined the various character developments as we are forced to focus on the Senator and her drive to destroy the institutions within which this program has been consolidated. This, however, undermined the psychological and emotional brilliance which attracted viewers to the first 2 movie. Even the Senator's resilience and convincing performance lacked the emotional drive to elevate it to a level similar to Barnes from Purge: Anarchy. All of her scenes just felt like showing the same facial and emotional cues, completely dumbstruck by the events unfolding.

I also found the choreography of events to unfold quite annoying, where supposedly dangerous situations didn't lead to casualties as the antagonists tended to invest in dialogue as if to create a theatrical performance. As such, there are multiple situations where the Senator is saved by the resistance squad, undermining the realism within this film. As such, the final act was disappointing as the members of the Founding Fathers who kidnapped her kept her alive long enough to enact some type of pseudo-ceremonial act of murdering her to appease the fabricated notion of 'higher power'. These seemingly unreal events makes this movie feel like a surreal, dream-like series of events rather than a representation of a society e could all very much be presented with in the near future. I really wanted to appreciate this movie as much as the previous 2 entries, but sadly it failed to philosophically and psychologically engrain itself within the real world context through the various clichés and misrepresentations of 'actual people reacting to a changing political climate'. 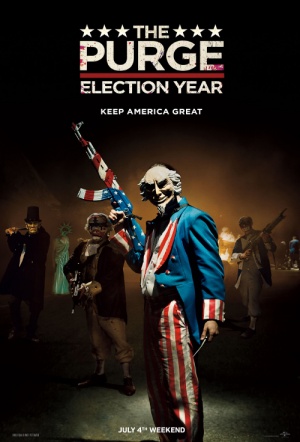